In the documentary, “Park Avenue,” we are given insight into the financial process of political campaigns.  The film’s premise is  that heads of corporations and entrepreneurs are the driving force in politics on issues that individual candidates support. The Koch brothers were a hefty contributor to Paul Ryan’s candidacy for vice I cut that part because it’s implied, his position of power. The film showed numerous examples of candidates who receive financial backing from corporate heads on both sides of the political spectrum.

This type of backdoor dealing is nothing new. Look at the early days of prohibition.

The show is populated with fictional/ and nonfictional characters, including notable gangsters Lucky Luciano and Al Capone. “Nucky” is based on real life gangster/politician Enoch L. Johnson. Good Cut anything that hints that you’re writing this. Don’t want to draw attention to anything except what you’re actually saying 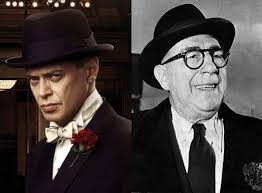 In the show, Nucky, in addition to being a gangster, is the treasurer of Atlantic City and is so he’s involved with politicians, two of which are President Warren G. Harding and Attorney General Harry M. Daugherty. Nucky has an expensive road project he needs finished in Atlantic City to improve his trade of bootlegged alcohol. So he financially backs Daugherty, because at the time he is the campaign manager for Harding, and he also locks down the New Jersey vote when it comes time to the election. Nucky is also thinking long-term investment, because having a politician in the White House who’s also in his pocket, could ensure the implementation of policies and further assistance in his endeavors. Sound familiar?